Before I write what I am going to say, I need to get a few preliminaries out of the way. A few days ago, on impulse, I took the “political compass” quiz. It locates people on a plane with two axes, one representing authoritarianism-libertarianism, and another representing a left-right economic continuum. 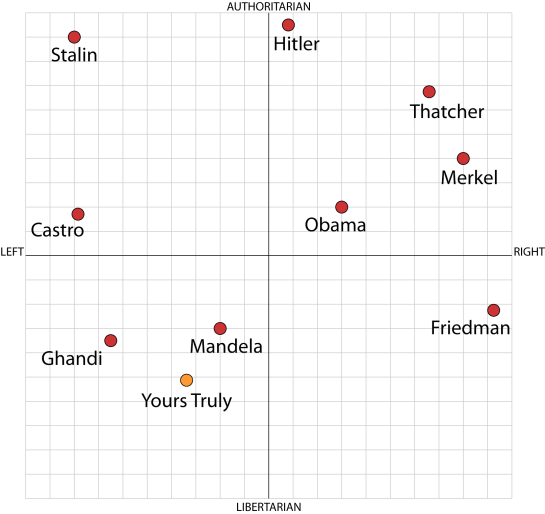 I’ve put locations I’ve found for famous political people and Milton Friedman. Obviously, they are estimates and I’ve seen Obama located at various points all over the upper right quadrant. However, I think it’s safe to say I am not a conservative.

Secondly, I believe that race is a cultural construct. In other words, there are no significant biological differences among people of different races.

Thirdly, I believe there is racism in the U.S. Enough studies have shown that black people with the same qualifications are less likely to be hired for a job than white people. According to one study: “Job applicants with white names needed to send about 10 resumes to get one callback; those with African-American names needed to send around 15 resumes to get one callback.”

Now that I’ve said that, I would also like to say that I am skeptical of the outrage directed toward McKinney, Texas from the left of the political spectrum. On the one hand, not having been there, I can’t possibly know for certain what happened. On the other hand, if I run it by my own past experience, I find the left’s story really hard to believe. It doesn’t pass the smell test. What is easier to believe? That a young woman who has lived in a planned community called Craig Ranch, a community with only 3,025 residents and several friends, also residents of this small community, were unrecognized by their neighbors, who suddenly, with no provocation whatsoever, started calling them “black fuckers” and slapped one young woman. Or, that a young woman who is trying to make money by throwing parties had hired a dj, posted information on social media sites advertizing a party with images of a pool although the party was only adjacent to the pool, the people who arrived to the party, mostly teenagers, who may or may not have been personal friends of the “host”, smoked pot, got annoyed when they realized that they could not go into the pool despite the invite that brought them there, climbed the fence, did not leave when asked.

In my nearly fifty years on this earth, most of which have been spent in the United States, I have never once heard anyone yell “black fuckers” at anyone. “Go back to your Section 8 housing” being yelled at people who are behaving contrary to community norms in a middle class community is something I can imagine easily. (Section 8 is what people call a program in the U.S. that gives housing subsidies to poor people.) At the same time, I’ve seen teenagers get out of hand at parties and have seen cops called. Mainly, as it happens, I’ve seen this happen to white teenagers.

A few problems I have with the story:

When I was in high school, the kids living next door would throw really wild parties when their parents went away. Once, kids they didn’t know started showing up and things got really our of hand (all white, btw). The cops came. Things got broken. The kids were never allowed to have a party again. I’ve seen this pattern so many times. There was no social media back then, but a parent would say things like, “You can have a party, but NO open house.” An “open house” meant anybody could come, and those sorts of parties could get out of hand.

Fortunately, no social media also meant no outrage. The cops came, the party would end. A couple of kids who were stupid enough to mouth back might wind up sitting in the back of a police car or waiting at the station until their parents picked them up. Typically, no one would be prosecuted for anything. The cops would pretty much rely on the anger of the parents. When I was a teenager, this was not a fun ending to a party, and I would typically leave if that was the way things appeared to be going. “Hey, anyone want to head to the diner and share a plate of fries with gravy?” Always a graceful exit in New Jersey.

Anyway, this all should be nothing. Kids got out of hand. Nothing serious. The cops got called. No one got hurt. But no, we have a major racial incident because Tatiana Rhodes is a little lowlife who doesn’t know how to behave in an upscale neighborhood. Look, I don’t live in a neighborhood like that myself and for a reason. I’m not that uptight. But I know if I go there I have to abide by their norms.

People living in McKinney who have had the nerve to say anything negative about the party goers have been threatened. Activists have tried to get the host of a “progressive talk show”, who resides in Craig Ranch and was at the pool that day, fired for saying that the incident was not racial. That’s right, black activists want a black, progressive host of a talk show fired for not agreeing with them one hundred percent. The Black Lives Matter movement has pretty much discredited itself to me. “Let’s go swimming” is a far cry from “hands up, don’t shoot.” They want to swim in a pool someone else has paid for and maintains. Don’t they know, there will be no pools for anyone? Look, I’m a liberal. I would love to see tax dollars spent to create public pools for everyone in the nation. Really. I know, I just lost every conservative with that statement. But I also know that we live in a democracy and until we vote for that we won’t have it. I accept that. Craig Ranch is a planned community, but it isn’t “gated.” Maybe it will be next time. I know from when I was younger, incidents like this often lead to stricter rules. They may find that rather than vague rules like “keep noise levels down and be considerate of neighbors” they will get “no amplified music ever.” Instead of “parties limited to 20 guests” and no one raises a fuss if there’s really 21 or 22, it will simply be “the pool may not be used for parties.” I grew up in the seventies, in the wake of the sixties, we had no school dances because they had gotten out of control in the years before I was in school. If some people can’t behave properly, the amenities are taken away for everyone.

There’s a lot of pressure in the left leaning political circle I frequent to voice outrage about the “racist cop.” I don’t feel that way. I feel disgust towards the young adult “entrepreneur” who sends out invites to a pool party with no pool and who lets her party get out of hand and can’t take the responsibility to even say, “Sorry, I messed up. I miscalculated. More people came than I expected,” or whatever her explanation is.

People really ought to consider how this incident will be regarded. People may not be willing to say it out loud on social media due to fear of being targeted by overzealous radicals looking for the next cause, but I grew up in a planned community with a swimming pool and I’m pretty sure I understand how middle class people will view this. Note that I didn’t say “white people”, I said “middle class.” Middle class people are very afraid of low-class people like Tatiana Rhodes coming into their neighborhoods. The people I lived with didn’t like poor whites either. They may or may not approve of the way one particular cop handled the situation, but I can promise you they do not approve of Tatiana Rhodes either and don’t see the tremendous racism of the incident. If the far left is going to jump on this bandwagon, they’re going to lose a lot of supporters. Between this incident and the support they lent to the drug dealers and thieves during the Baltimore riots, kindly calling them “protesters”, the Black Lives Matter has most certainly lost my support. Look at the chart I posted at the beginning of this post. If they’re losing my support, do you really think I’m alone?

Oh, yeah, they may have just lost the election for Hillary Clinton.