This is barely even a sketch, more like a sketch of a sketch, but I hurried it along because there’s a lot I want to write about this subject. 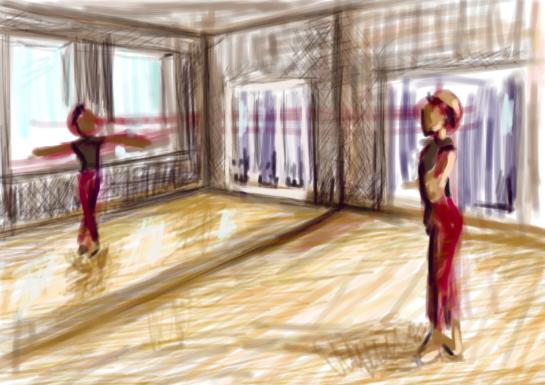 The summer that my grandfather gave me his old thirty-five millimeter rangefinder camera, my family piled in the car and drove up to Bennington, Vermont where my sister would spend the summer studying dance. It was unseasonably cool and the sky was overcast. Somewhere in my boxes of old photos I have pictures of the dormitories, austere white houses ranged around a green with the hills and mountains in the background. I followed my sister as she went to check out the dance studios. The studios there were truly gorgeous, large modern rooms lit by skylights. At my request, my sister moved about the space as I took photographs.

Last Saturday, I spent an hour or two poking around looking for good footage of Bob Fosse’s choreography on the internet. Under the temporary delusion that I don’t have nearly enough irons in the fire already, I was thinking of starting a series exploring some of my artistic influences. I’ve only posted a small amount of my older work, but the human body has figured prominently in my work since adulthood. It’s hard to imagine that having a dancer for an older sister was without any effect.

To contemporary ears, the sexism, the heterosexism and, elsewhere in the essay, the ethnocentrism stands out. However, the vague sense that there is something not quite proper about art is an idea that comes up in cultural environments very different from Loos’. Loos, needless to say, wanted to rid architecture of ornament, not temporarily as Louis Sullivan wanted, put permanently. “Freedom from ornament is a sign of spiritual strength.”

In her book, Sisters of Salome, Toni Bentley, a former dancer with the New York City Ballet, explores the relationship between dance, eroticism and nudity.

The connection between Bernardin, the king of naked dancing, and Balanchine, the great ballet choreographer, became clear as I experienced an astonishing moment of self-recognition: this glamorous, slim, athletic woman was a Balanchine dancer without her leotard – and I was she. The striptease at the Crazy Horse gave new meaning to my years spent in tights, tutus, and tiaras. Partial, simulated, decorated and disguised nudity is part of the appeal of a ballerina. …

In dancing Balanchine we were dancing naked (if we were dancing well) – not only in showing every delineation of a highly trained body, but in “turning out,” classical ballet’s guiding force, where hips, legs and feet are literally opened outward, away from each other. What is revealed is the sexual core. In attempting this unnatural vertical physical split, encounters with one’s moral and spiritual bodies are inevitable; it is deep and dangerous exposure.

I have posed nude, for both painters and photographers, and I have drawn and painted a great number of nude models myself. I groan and roll my eyes when people talk about artists and their models as if they are always, inevitably, lovers.  I’m sure it has happened, but, if you haven’t posed yourself, let me warn you there’s nothing sexy about being slightly chilly, incredibly bored and having a crick in your neck or an itch you can’t scratch. No one has ever made a pass at me during a modeling session, and if someone did I think I would put on my clothes, walk out of there and never go back.

Artists of all sorts, not least of all dancers, have long existed under a cloud of disrepute, although that has lifted significantly over the course of the last century. Has that come with excessive denials of any sexual content in art whatsoever? Sexual experience is part of the human experience and, as such, is as legitimate a subject for art as any other part of the human experience. The sexy moves in the clip from Bob Fosse’s oeuvre must have taken many unsexy hours in the dance studio to perfect. As the dancers embrace one another, we are seeing art, not reality. Anything that threatens to blur that line, as in that film clip, causes intense discomfort. Therefore, it is disappointing, if not surprising, that the Royal Winnipeg Ballet School has dismissed one of its students, Jeppe Hansen, presumably for appearing in a pornographic film. (h/t JerBear)

The introductory paragraph in Maria Tallchief’s obituary which appeared in the Washington Post today began,

Maria Tallchief, a dancer of electrifying passion and technical ability who forged a pathbreaking career that took her from an Oklahoma Indian reservation to world acclaim….

It struck me that the phrase “an Oklahoma Indian reservation” conjures up an image of a life quite different from the one Maria Tallchief experienced. The reason behind the gap between that image a reality lies in fascinating, but little known episode in American history.

During the 1920s, the Osage were the richest ethnic group in the United States. An article in The New York Times from that time period called them “the wealthiest people per capita on earth.” The article goes on to deplore the idleness and taste for luxuries this wealth had created. In a book he wrote investigating the suspicious death of his grandmother, Dennis McAuliffe describes vividly the gracious homes, cars, pianos, private school educations and other luxuries the Osage enjoyed at this time. This is the Indian reservation on which Maria Tallchief was born. “Their wealth was great enough that Ms. Tallchief’s father never had a job in his life.”

With the intent of getting them into Hollywood musicals, Ruth Tall Chief moved the family to Los Angeles in 1933. Maria Tallchief later said her father happily agreed to the plan because he was an avid golfer and thought the climate would allow him to play more often.

Ms. Tallchief and her sister studied dance with David Lichine, a student of Russian ballerina Anna Pavlova, as well as Bronislava Nijinska, the sister of celebrated dancer Vaslav Nijinsky.

For many decades the United States government had a policy called allotment to end the communal holding of Indian lands. It was believed that private property would be a means of “civilizing” Indians. Tribal lands  would be divided up and allotted to individual members of the tribe. The Dawes Act, which instituted this policy, did not cover all tribes and the Osage were one of those not originally subject to this policy.

When oil was discovered under the Osage reservation, it made the tribe wealthy. They held their mineral rights in common and each individual received an annuity. Eventually the United States government managed to force the allotment policy on the Osage, however, the Mineral rights continued to be held in common. Members of the tribe were given shares in the oil wealth which could be inherited.

This period, around the time Tallchief was born, saw a great many murders and suspicious untimely deaths. White people married into Osage families and sometimes murdered their members to get the money. McAuliffe believes that this is what happened to his grandmother and he tells her story in The Deaths of Sybil Bolton. In one shocking incident, a white man, Ernest Burkhart married Molly Kyle. He and his accomplices murdered Molly’s mother, sisters and other family members, resulting in Molly inheriting their shares. “With local and state officials unsuccessful at solving the murders, in 1925 the Osage requested the help of the Federal Bureau of Investigation. It was the bureau’s first murder case, and by the time they started investigating, Molly Kyle was already being poisoned.” (Wikipedia)

Maria Tallchief was the first Native American to become a significant ballet dancer. Here is a video that includes some footage of Tallchief dancing a part Balanchine choreographed specifically for her. Contrary to the worries expressed in the 1921 New York Times article, Tallchief’s career shows that inherited wealth does not inevitably end in dissipation. In fact, had this talented woman been born in poverty she may have never had the training she need to become the great dancer that she was.