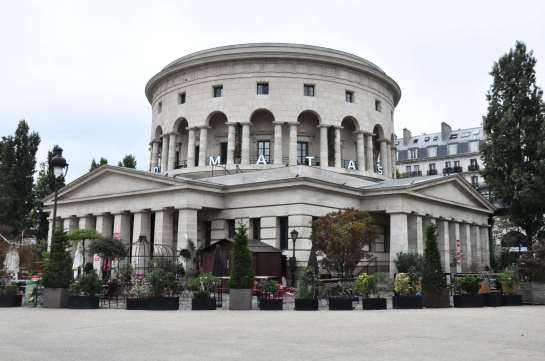 In a previous post, I mentioned how the second day here I walked along the Canal St Martin to the Rotonde de la Villette. I wanted to see the building because it’s considered a significant example of neo-classical architecture. The Rotonde de la Villette, also called the Barrier of Saint Martin, is one of the propylaea designed by Claude-Nicolas Ledoux between 1784 and 1788. 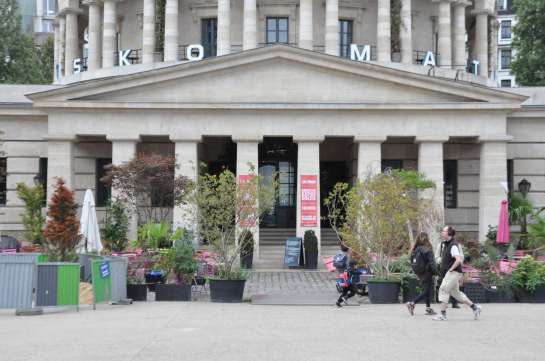 In the late eighteenth century a wall was built around Paris called the wall of the Fermiers-généraux which was to prevent goods entering the city from avoiding a local tax called the octroi. The sixty-two propylaea functioned as toll barriers. 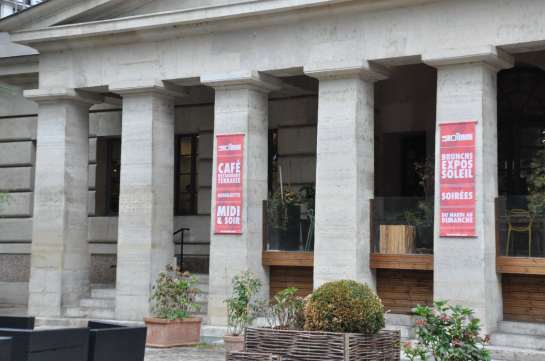 The severe symmetry and classical forms recall the work of Palladio. However, the purity and simplification of forms are far more extreme. 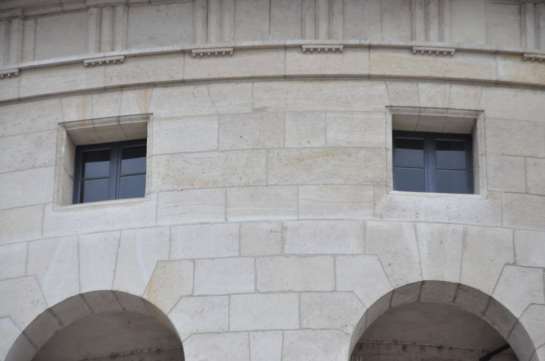 Unfortunately, there was some work going on around the building the day I was there. 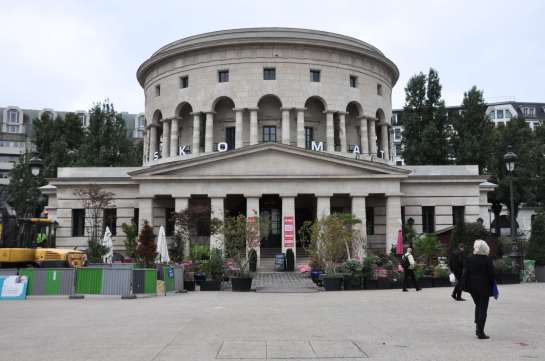 High modernism with large expanses of glass and many reflective surfaces.

This photo what shot from the fourth floor of an apartment building looking down at the courtyard below. 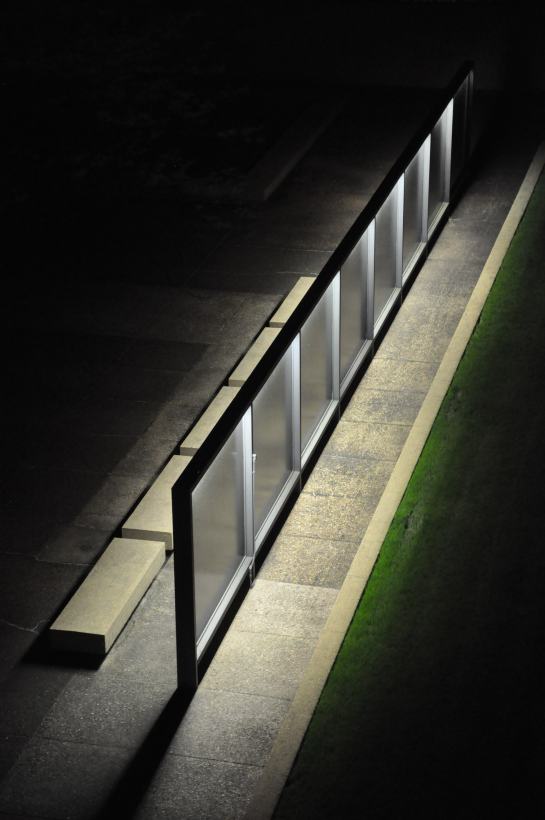 Emily Dickinson once said that she knew when she had read a good poem because she felt as if the top of her head had been ripped off. I feel like it’s more like getting high or drunk, but I suspect that she and I are describing a similar sensation. It is not only how I can discern a good poem, but also a good painting or a good building. Once, talking to a friend who is a writer, obsessed with seemingly all art forms, and a self-described aesthete, he commented that some people seem to have a facility for perceiving aesthetics and some people don’t, that it was like having an extra sense that not everyone shared. I would adjust this statement slightly and say that it’s not a binary option, but a continuum. Some people have that sense to a greater degree than others. There are people who seem to rarely ever be moved by aesthetic experiences, and a large number, probably the majority, who can feel it, but can also ignore it when they choose. Then there are those of us who find it nearly impossible to not think about, to the point that it is occasionally painful.

Although it is possible that this sensitivity can be cultured or developed, I suspect it has a significant inherent component. You grow up spending your life trying to convince others, often futilely, of the importance of some object or another. Eventually, if you’re lucky, you receive confirmation from an external source that these peculiar feeling you have are shared by others. Once when driving along a winding county road, I made my father stop the car so we could get out and look at an abandoned building. My father was a graphic arts teacher and, although architecture was not a particular interest of his, he had a general interest in all forms of visual art. We walked around the large, blocky building a bit. Sometimes, forms can be a delight. Finally, when there was not much left to do, we got back in the car and drove away. I remember vaguely hoping that it would be restored and not torn down. Some time later, I found out that the building had been designed by Louis Sullivan.

As a very young child, whenever my family would take a trip into New York City, I would keep my fingers crossed that we would drive past a particular building. When we did, which wasn’t frequent, I’d press my face against the glass of the car window and keep my eyes glued on it until it came into view and look at it until it was no longer visible, trying to imprint every line and curve in my memory. I’d point it out to my mother. “Huh? But that’s just a big old warehouse.” It would be over a decade before I learned that the Starrett Lehigh building was not “just” a warehouse but was an influential and highly regarded piece of architecture. Its curves, set backs and dramatic horizontal bands of windows would inspire many prominent architects such as Frank Lloyd Wright, Le Corbusier and Phillip Johnson.

Eventually, you develop some confidence in your own judgement. You look at something say to yourself, “That is a handsome building,” and you feel confident that it has some value even if the designer never became famous or it is what some people call “vernacular” architecture. I was put in mind of a category of vernacular architecture which I frequently find very attractive in a post about abandoned buildings by Life&Ink, that is a sort of vernacular commercial architecture, which I have mainly seen in the U.S. and Canada, built during the 1930s that is influence by the machine aesthetic. It frequently has horizontal lines and curved surfaces. Glass block and neon are not unusual. I sometimes think of these as Domesticated Deco. There’s probably a proper name, but I don’t know what it is. It is also, in my not so humble opinion, undervalued. Photos of declining American cities inevitably include a few photos of these. There are many sad aspects about Life&Ink’s post, but the fact that at least a couple of those buildings seem to be nice looking buildings makes it even sadder. When these buildings are not abandoned, they are frequently torn down or their facades are ripped off and replaced by something which is currently more popular.

What is popular in the U.S. today? It is important to note that I didn’t say stylish; I said popular. We are no longer in the realm of pedigreed architecture, but the realm of the vernacular. In fact, vernacular architecture today seems to take its cue, not from the work of contemporary architects, but from other styles, both high and low, of the past. Not far from where my mother lives, there are large expanses of small, suburban houses of the sort that were built in large numbers after the Second World War. For decades there were no significant changes. They were small, and additions were commonplace, but the additions were frequently built with the same lack of pretension as the original house. During the past decade or so, however, these houses have undergone significant alterations. Clapboard siding has been replaced by a stucco like material. On the corners of the exterior, this stucco is shaped into imitation quoins. Columns are added, Ionic, Corinthian, Composite, who cares. And then maybe a front door with an oval, leaded glass window. All of this, and more, on a building the scale of a shoebox. I shy away from saying what I really think of these alterations for fear of offending someone who has done exactly this to their house. A visit to the dentist is more pleasant than driving down one of these streets.

I wonder what it says about our culture. This is always a dubious exercise. “The past’s notion of what the future would look like.” That’s a sentence I’ve read many times in reference to the machine inspired designs of the twentieth century. The notion is mentioned in another post that was done in response to this week’s Weekly Photo Challenge that showed a house by a Finnish architect that looks like a UFO. The round window and industrial materials put me in mind of the work of Jean Prouvé, a modern French architect and designer whose work I very much enjoy. The implication often seems to be that the people in the past were naive because they believed technology would improve our lives.

However, I believe that people who look to the past are equally naive. It is true that we have problems in the present, but the solutions lie in the future, not the past. Buildings are one of the largest consumers of energy, and hence one of the largest contributors to climate change. However, if we were to heat our houses with the methods of the past, by burning wood, peat or dung, we would be in far worse shape because there are far more people today than in the past. Once, sitting in a hair salon, I read a profile in a magazine about an engineer. He said that he felt that the engineers he knew had a more optimistic view of the future than other people and they were eager to get to work to solve today’s problems. We must be brave and face the future, whatever it looks like, because time only moves forward and we have no choice. Hopefully, that means a more efficient and thoughtful use of resources, and those resources include the buildings left over from the past.

After the theme, home, was posted on Friday, it seemed to me that I could go in a variety of ways about it. I do have my own photos of birds’ nests. I also had photos of a variety of other animals, including a chipmunk at the entrance to his burrow, and an old oak tree that was home to a wide variety of animals and later fell on the neighbor’s home. I decided not to put up a picture of my own home because I live in an apartment building which, although I love it, is a severe modernist building that doesn’t say “home” to most people. I’ve posted photos of it on the internet before because I think it’s a great building and inevitably I have people tell me how horrible it is.

So what would say “home” to people. Then I remembered a building about a mile or so away from where I live. It is a tall narrow nineteenth century town house. Much of the city of Baltimore is made up of townhouses from all eras of the city. Usually, they are built in groups and they share wall with their neighbors. The one that I thought of, however, was stuck between two hulking modern buildings. I wonder how this happened. Did the individual who lived there refuse to sell their home? So on Saturday, I went out to take a bunch of pictures of it.

For images of other people’s interpretation of the theme, go to the comments section of the Weekly Photo Challenge.