I don’t make New Year resolutions, but if I did, one of them might be to write more. I spent the first couple of years cultivating this blog. One thing that surprised me was getting friendly with people who responded. I think I originally imagined something more like a message in a bottle. On the other hand, once as a kid, I put a message in a bottle and someone sent me a letter with a drawing.

Then, for a time, I was very active on this blog and commenting on other people’s. That was very good for a time, but since my internal life and emotions tend to be a bit tumultuous, I think I’ve alienated quite a few people over the past couple of years. In some cases, it was probably inevitable, but in other cases I feel bad about it. I’m not an easy person to get along with.

In any case, it’s gone back to feeling like I’m tossing messages in bottles again. I’ve become faster to write something in a personal email than to write it on the blog.

So, the other day, my mother was here and she was helping me organize my apartment. It’s a little strange because I plan on moving as soon as my lease is up. Still, I had become so disorganized it was becoming difficult to function. One problem was that I never completely developed a “place for everything,” so it is impossible to put “everything in its place.” When I try to tidy, the things without places wind up in little piles which are highly subject to being messed up the next time I look for something I need.

There are a few reasons why I have difficulty making a place for everything. Some are practical. I needed to buy some shelves and containers to put things so they can be put on shelves. Others, however, are emotional.

I was determined to tackle some of those difficult piles and chose to either get rid of things or store them in a proper place where they could be found without rifling through a box of unrelated stuff and making a big mess. I had a small plastic container that had once contained some of those moistened cloths for cleaning the floor which had been bouncing around for a few years. It had “table by the door” written on top of it and, it was, indeed, full of small items that had been in a drawer in a table, like a key ring with no keys on it and a business card from an Englishman I dated for six months who turned out to be married. Apparently, when I moved sometime around 2010, I must have thrown everything in that drawer in the box. I went through the box. I ripped up the business card along with a few others from people I’m unlikely to contact again. (Why do men sometimes give you their business card? What do they expect me to do with it?) Then, I found a little business card holder that a friend had given to me. I opened it up and it was filled with my own business cards from a business I tried to start up back in 2008. I had spent a couple of years developing a product, figuring out how to manufacture it, making designs, securing a loan and buying equipment. I put a huge amount of time and effort and hope into it. In the end, I couldn’t sell it and the company, if you could call what was essentially a one person operation a company, went under.

I stared at the business cards, which were printed up with so much hope, and I started sobbing.

I hesitate to say what’s on my mind because I’m afraid I’ll sound like a great big whiner, but I’ve had a lot of failures in my life. When I was young, I was very smart and I did well in school. I was fairly together. I didn’t smoke, drink or take drugs. Adults described me as “unusually poised.” I graduated from high school early and had an academic scholarship to college. I was the kind of kid everyone expected to succeed.

Ever since then, though, things haven’t gone as well. I try to look for a pattern for my failures, but each time the reason seems different. A failed marriage, a failed attempt at graduate school, a failed business. They’re all different.

There are days I want to get rid of all my possessions and start over again because there are so many painful memories attached to things.

It’s hard for me to straighten my apartment and clean without crying.

Well, this isn’t quite where I meant to go when I started writing. Sorry for being such a downer.

The new year has already started off rather well. In the past, I’ve mentioned wanting to see the no-longer endangered Delmarva Fox Squirrel. Several times, I’ve taken trips to the Eastern Shore of Maryland in hopes of catching sight of the little bugger. We had only just arrived and I got out of the car to take some pictures of some Mallard Ducks when I caught something out of the corner of my eye. What should be running up to me but the biggest squirrel I’ve ever seen. It looks a lot like a heavy-set Gray Squirrel in photos, but I assure you when you see it you know it’s different. It weighs about three pounds, that’s three times heavier than a gray squirrel. After pausing to let me get a better photo than I could have hoped, it darted across the road. 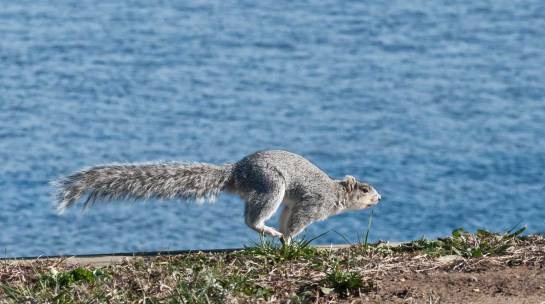 Besides the squirrel, we saw some pelicans.

We were driving along and my sister pointed out two lumps in the middle of the water and asked if I thought they were anything. I suggested logs. 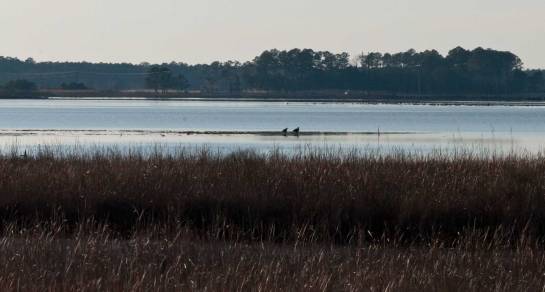 Her eyes are apparently better than mine. 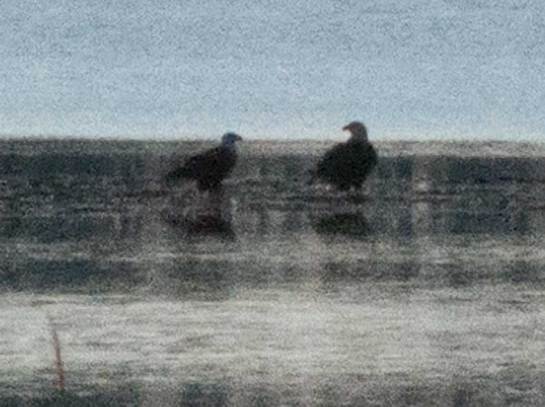 While I was taking picture of some geese and swans, a Great Blue Heron flew into the picture. 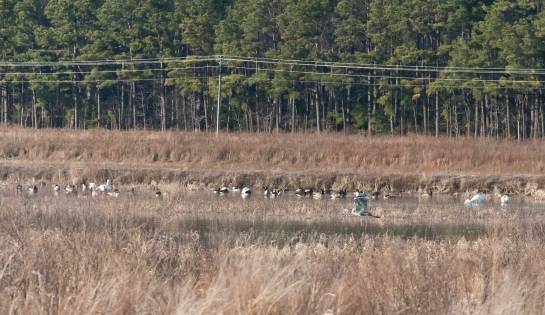 Then a Turkey Vulture nearly flew into me.

Really, this thing was close. Or at least if felt as if it was. They are among the largest birds around here with a wingspan that can be up to six feet. Then I looked up.

Maybe it’s me, but I think they’re cute.

Then, we saw a bunch of cars pulled over and everyone was taking pictures. It wasn’t too hard to find the locus of their attention.

A big bird in a small tree. As I was taking pictures of this Bald Eagle, another landed on the tree.

They are always quite a sight.

And just before we left, we saw one more Great Blue Heron. 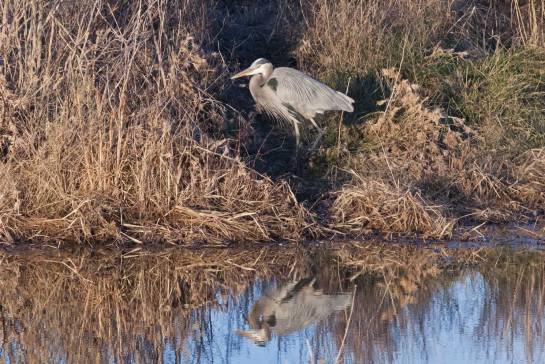 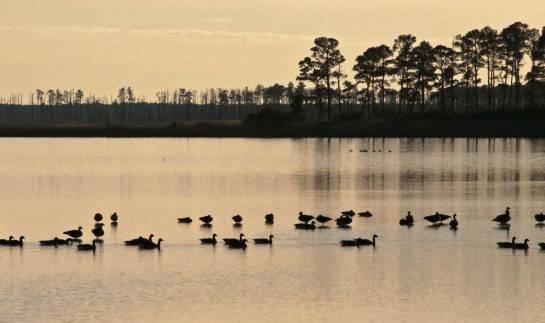