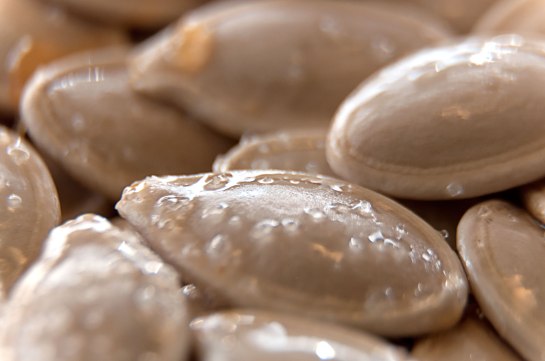 Last week, I made myself pumpkin stuffed with corn and beans. It was so good, I went out and got myself another pumpkin. This time I stuffed it with rice because I once read a recipe like that. That was good too. I know this isn’t a cooking blog, but if you haven’t tried it, I recommend it.

First, I cut up some bacon into little bits and cooked it to render the fat. While the bacon was cooking, I sliced some shallots and put them in with the bacon. Leaving that on the stove to turn golden brown and turning off the heat later, I cut a top in a pumpkin and scooped out the seeds and strings. I used to love doing that as a kid, but now it’s a chore. Where’s a mess loving kid when you need one? Turn on the oven to 350°F (180°C). Chop some cheese into small dice. Drain the excess fat off of the bacon. Since the pan had cooled by this point, I used that instead of dirtying a mixing bowl, but I wasn’t cooking in it. So, if the pan is still warm, use a mixing bowl. (The English teacher’s daughter in me is feeling uncomfortable about mixing tenses here. Sorry, Mom.) Mix together corn kernels, beans, the diced cheese, ground pepper, nutmeg and whatever herbs you have on hand with the bacon and shallots. I used tarragon because it was the only fresh herbs I had on hand. Other choices might be better. I had to eyeball the amounts. I wanted approximately equal amounts of corn and beans and the whole thing should fill the pumpkin. You can pack it in if necessary. Pour about a quarter cup of heavy cream inside. Put the top back on the pumpkin. Bake for about an hour and a half to two hours.

I liked the corn rather than the rice. It seems to me to be a nice variation on succotash. I don’t know if people outside of North America know succotash, but it’s basically corn and beans, usually lima beans. It looks like it can be a nice dish for Thanksgiving. The whole pumpkin can be brought to the table and the food scooped out from inside. You have to scrape the spoon against the pumpkin itself when you serve it. The only downside for Thanksgiving is that I usually try to make all the side dishes on top of the stove because the oven typically has a turkey inside taking up all the space. After all, Thanksgiving dinner is all about coordination. What goes in when, for how long and at what temperature. What’s on which burner. It’s very filling and can be a meal in itself, which is how I ate it.

Here are the ingredients:

I would use a milder cheese with the corn, but you could probably go with a stronger taste with the rice. Eliminating the bacon and sautéing the shallot in oil is probably easy.

It was good with the rice, too.