Needless to say, I’m incredibly excited about my upcoming trip to China. A few years ago, there was a student at my mother’s school who had recently arrived from China at about the age of fourteen. My mother tutored him in English and sort of took him under her wing. Now, we are invited to his wedding. I’ve never been anywhere in Asia before, let alone China.

So, in preparation for the trip, I got one of those language learning programs and I’ve been doing a little bit everyday. I don’t expect much, really, but since I don’t know a word of Chinese, I figured anything is better than nothing. In Europe, if I’m in a place with a language that’s either Germanic or Romance, even if I don’t really know the language, I can take a guess. At minimum, I can read street signs. I’m a little bit apprehensive about China, though. A website I found suggest that these are some useful words to recognize. 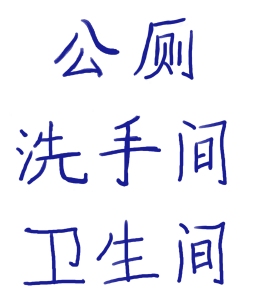 Supposedly, these say toilet. If not, do let me know.

The language learning program is done entirely in the target language. It shows pictures and words and you hear a recording of voice. You have to match the picture to the words. Sometimes, however, the meaning of the picture is unclear. Sometimes, it feels like you’re picking it up quickly. Other times, however, when the picture is confusing, I feel like a total moron. I click and click and get a big orange x and a sad sound.

There was one series of pictures which showed three on top and three on the bottom. On the top, one was of a man and two women walking down the street, another was of a woman in a street talking on a cell phone and a third was of a man talking on a cell phone. The top three would have been confusing, except the word for France, fàguó, had already been introduce and the lesson involved names of countries. Okay, great, so the sentences are saying something to the effect of “They live in France,” etc. (Since there’s no translation, I’m left feeling a little unclear if it’s “They are from France,” “They are in France,” or “They live in France.” Sometimes a more exact meaning becomes clear a little later. Once I took a psychological test in which I tested very highly for something called “ambiguity tolerance.”)

Beneath the photos of the people in France, however, there were another set of three photos that were highly mysterious for me, and I kept getting the question wrong. One photo, is of a woman wearing a cowboy hat. The caption for this says, “tā shì cóng měi guó lái de.” Great. Comparing it to the French photos about, I’ve got the idea that this woman is from some country, the name of which we have not yet learned. Obviously the point of this screen. Hmm. Cowboy hat. What country is that? Argentina, perhaps?

Another picture, however, has a baseball player. Do they like baseball in Argentina? It certainly wasn’t an association of mine. Maybe it’s Cuba. But they don’t really have cowboys in Cuba? Uruguay? Do they like baseball in Uruguay? They play baseball and have cowboys in Mexico, but there’s that third picture. It’s a picture of some little girls in colorful costumes. They’re wearing shirts with a blue square with white stars on it and red and white stripes on the rest of the shirt. They have little flags and pinwheels and look like they could be at a party or a parade. Cowboys. Baseball players. Little girls in red, white and blue outfits with stars and stripes. Where could these people be?

I was staring at the photos racking my brain. Are these people all from the same place? Where could the be? When I finally figured it out, I felt so stupid. I laughed out loud at my self.

Where on earth could she be from?