I was reading the comments on one of Noel’s blog posts. Violet mentioned that around Easter and Christmas the doorbell might be rung by people proselytizing as many as four times in a day. More than a few people were shocked to hear it. Although that is at an extreme, I find that my own experience regarding aggressive preaching is often at odds with those of other people living in the U.S. I knew that the region in which I lived was not one of the most religious parts of the country, but when I looked it up on the internet, a map at the county level showed that much of the region is more religious than I thought. However, the map was small enough and I couldn’t see my own county, New York, on it very well.

So, I looked at a few other maps, including some that showed the most common religious group and another that showed the second most common. They were Catholicism and Judaism, which went a long way to explain why I didn’t encounter much proselytizing. Although Catholics, like all Christians, feel an obligation to “spread the word,” they don’t tend to be as aggressive about it as some Protestants. Of course, as we all know, Jews do essentially none.

So, I got curious and thought I might dig down a little deeper. I found a source that had the religious affiliations for the residents of New York City, broken down by borough. For those of you who don’t know, New York City has within it five counties. The counties correspond to the boroughs. Manhattan is New York County, Brooklyn is Kings and Staten Island is Richmond. Queens and the Bronx have the same name for both the county and the borough. I found some figures and I made up a graph because I like seeing things visually. 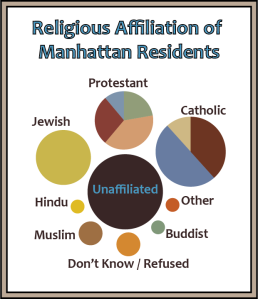 The source is PRRI, Public Religion Research Institute. I don’t know how accurate it is, but the numbers didn’t leave me in shock. The biggest surprise was that there appear to be so few Buddhists. At thirty percent, the largest group was the “unaffiliated.” I know that many of us are curious how many people are non-believers and it would have been nice to see this group broken down. I think you can see from the relatives sizes of the bubbles, it doesn’t feel in the least bit odd to be a non-believer in Manhattan. The source also broke down Catholicism by race. I marked it, but in the end I didn’t label it. It had the group I’m calling Protestant in separate groups, “Mainline Protestant, Black Protestant, Hispanic Protestant and Other Non-White Protestant.” I won’t even begin to get into how weird that all is. Is “other non-white” redundant? Why not just “other,” or “other race?” What about blacks who go to a “mainline” church? Also, there were several groups in the survey who weren’t numerous enough to make it to the chart, including “White Evangelical.”

Now you all know why my experience with religious people is so different than that of others who are U.S. citizens.