I just came across this on Twitter. I haven’t posted about Raif Badawi because I figured most of my readers are already familiar with his situation. For those of you who don’t know, Badawi is a political activist in Saudi Arabia and has been found guilty of apostacy. (An important note: He does not call himself an atheist or agnostic!) His wife has received political asylum in Canada. His lawyer has also been imprisoned. Now, it seems his sister is also being persecuted.

The photo at the bottom of the post is from 2012. Let’s hope the two women on Samar Badawi’s right and left remember her and speak out. 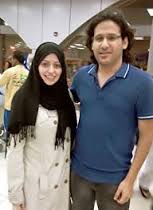 Samar with her husband Waleed before his imprisonment

We have just heard that Samar Badawi, the sister of free speech activist Raif Badawi has just been imprisoned in Saudi Arabia. Samar has heroically continued to campaign for the release of her brother and her husband the lawyer Waleed Abu Alkhair. Waleed represented Raif in his trial and is also a free speech campaigner.

Samar’s contribution to women’s rights and human rights has been recognised internationally. She has continued to be an important source of information for those wanting to know what is going on there.

We understand that she has been imprisoned for her activity on Twitter.