I’ve been continuing to read up on castles. For various reasons I’ve become interested in the whys and wherefores of their development. Although lines between different categories like fortified cities, castles and garrisons can get blurred, according to Wikipedia:

Scholars debate the scope of the word castle, but usually consider it to be the private fortified residence of a lord or noble. This is distinct from a palace, which is not fortified; from a fortress, which was not always a residence for nobility; and from a fortified settlement, which was a public defence – though there are many similarities among these types of construction.

These arise when the central government ceases to be an effective bulwark against violence and, by necessity, delegates the defenses to private lords. While I was surfing the internet, I found a blog post that had some nice photos of some castles. I didn’t bookmark the page, so I can’t give a link, but in one of the comments someone wrote that it was a shame that the U.S. missed out on “the whole castle building era.” A shame? Thank heavens. Fortifications are the mark of conflict and the fewer one has in all likelihood the more peaceful and time and place happened to be. Castles only look romantic today because the need for them is no longer there. 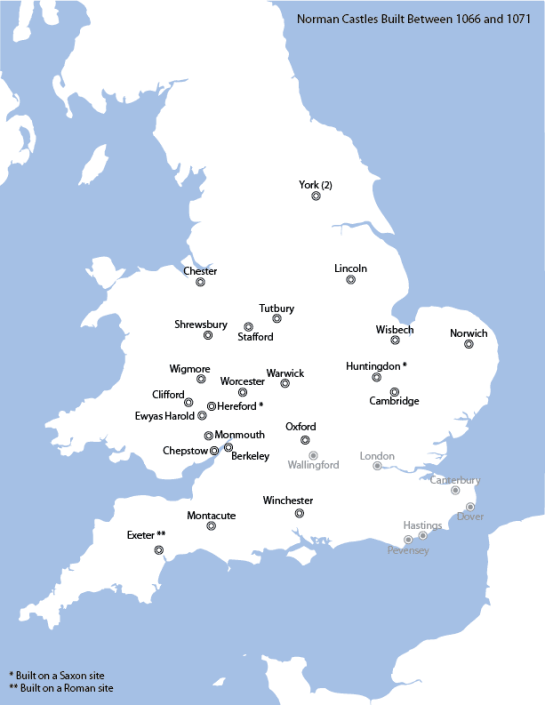 I made this for myself because I’m a very visual person. The locations listed in gray were the castles built as part of the initial conquest of England by the Normans. You can see the concentration of castles near the Welsh border.

When people advocate for anarchist or radical libertarian ideas of government I wonder how good their grasp of history is.