Inaccuracies in the news media make me mad. How are we supposed to know what we know when the people whose job it is to inform of us of what is going on are either total idiots or too lazy to bother to do their jobs. I was on a little bit of a binge of reading about medieval fortifications when I saw on a Google Search results page “10 of the Best Medieval Walled Cities.” Really, I should know better than to click on “Number of Superlative of Plural Noun” no matter what the subject. I’d already been subjected to many fantasy and Minecraft renderings of castles and such. Still, CNN is supposed to be a real news source. You’d think they’d have some standards. Then I saw it… Quebec. What the flying fuck! The medieval era was over when the city of Quebec was settled. The “Chateau Frontenac” is a hotel built by the railroads. It’s impressively big because it was built after the advent of elevators. The walls… the were built by the British to keep out the Americans during the War of 1812. I’m writing off the top of my head and you can bet if I thought I was going to pick up a paycheck for that, I’d double-check those assertions. The writer for CNN has no such scruples. Furthermore, I must imagine other people at the company saw that page. I would tempted to say the editor is at fault as well, but as far as I can tell news organizations have fired all editors, fact checkers and everyone except the marketing people. They probably regret the peculiar requirement of consumers that they actually have a product to sell. 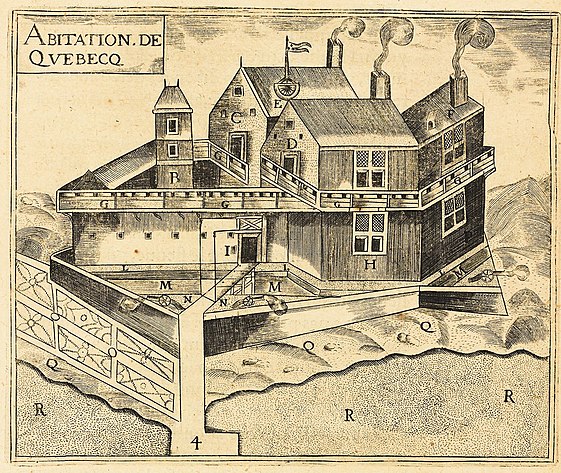 Champlain’s rendering of the habitation he built in Quebec. The “walls” surrounding the settlement were probably a wooden palisade.

Anyhoo… Saint Augustine – Spanish – 1565. Jamestown – English – 1607. Quebec – French – 1608. If you live anywhere on the North American continent you should know those dates without stopping to think. (People elsewhere are forgiven.) I swear, sometimes I wonder if some people forget how to tie their shoes.