My sister injured her back, so yesterday I went to visit. I brought my camera with me because, as I said to my sister, “If I don’t bring it the animals are sure to do something cute.” So, I sat outside for a time taking photos. I got one picture that made me think about all those pictures you see showing “nature’s wonderful camouflage.” So, go below the fold and see if you can find the bird…

Yes, I know… I’m juvenile. But this Northern Cardinal sure isn’t with his fabulous adult male plumage. 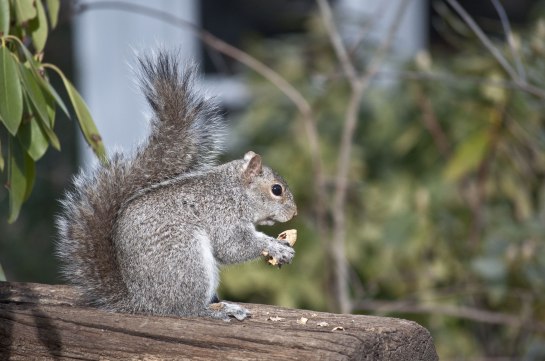 First, I saw my girl. It had been a while, so it was nice that she remembered me. I also saw Spot. I didn’t see Tripod, but my sister’s seen him recently, so I’m sure he’s around. 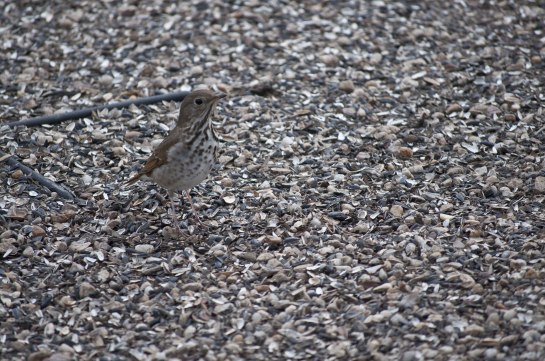 Next, a bird that is a little bit hard to see, a Wood Thrush. According to the Cornell Ornithology lab, the Wood Thrush populations appear to be declining. 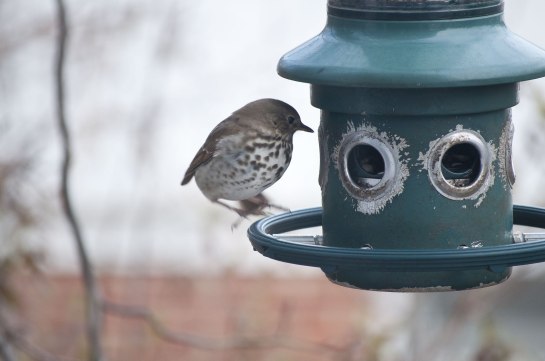 I had previously identified this bird, or another similar bird, as a Hermit Thrush. I changed my mind, but I’m still not confident. In person, his back and head was a distinctly warm, reddish-brown and he did not bob his tail up and down. Making things complicated, we’ve been seeing him all winter. 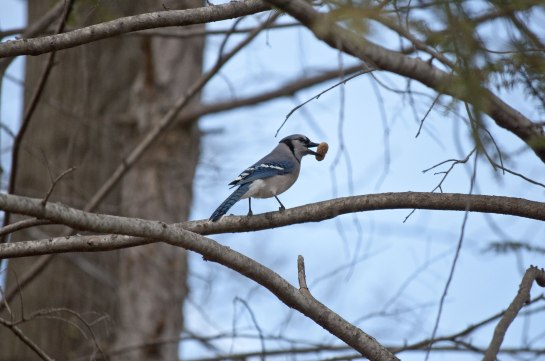 As I’ve mentioned before, the Blue Jays have been watching me feed the squirrels and have learned some of their tricks.

Here’s a Northern Mockingbird sharing the feeder with a Black Capped Chickadee.

The Mockingbird is a comparatively new visitor to the feeder.

I was taking a picture of this female Northern Cardinal when…

…this female Red-bellied Woodpecker chased her away. You can see the red belly in this picture.

If anyone has a more positive identification on the spotted thrush, I’d love to know. I took the photos yesterday in Baltimore, MD.