On New Year’s Eve, I went out to hear a band. I was sitting at the bar, nursing my beer, when the young woman with whom I’d struck up a conversation asked if that was a picture of my cat on my phone. No, I said, it was my sister’s cat. However, I explained that a couple of years ago, when I first left New York City, I was down on my luck and I lived with my sister for a year.  Her cat and I became strangely close. I went back to school, and, late at night when everyone else was asleep and I was doing homework, he’d lie on my desk. Every night, he’d sleep on my suitcase on the floor next to my bed. The woman, who told me that she had just gotten a little gray kitten from a vet that she hadn’t even brought home yet, listened patiently to my little stories about the boy. He was clumsy, which is how he got the name Crash, though he responded to the name Boo Boo.

On New Year’s Day my sister found him lying on the floor, not breathing. She rushed him to the vet, who said that he had probably had a sudden heart attack or an aneurism and probably had already been dead for a while when my sister found him. My sister must have been in pretty big denial to go to the vet with him. My brother-in-law is devastated. He started his own business a few years ago and Crash would sit at his side while he did the accounts.

Sis says Mama Cat is wandering around the rooms in the house as if she’s looking for her baby. 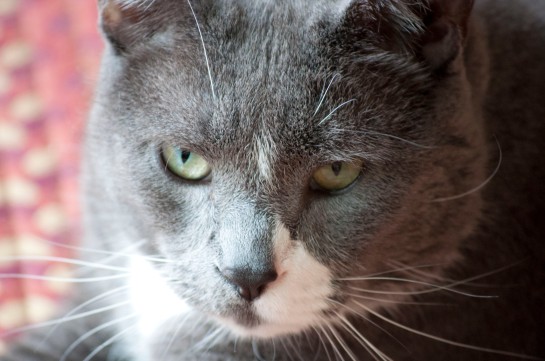