Well, I just thought that when sketch day rolled around on Tuesday, I’d head on over to the Louvre. It wasn’t on my bucket list because I don’t have a bucket list, but it was one of those things you think to yourself that you’re going to do one day, so Tuesday was going to be the day except – the Louvre is closed on Tuesdays. Therefore, Monday is Sketch Day this week.

My apologies for the poor quality of the photographs. I don’t have a proper set up here for photographing my drawings.

I started in the Cour Marly, which is a court which has been enclosed with a skylight and houses sculptures mainly from the period of Louis XIV. As usual, my subjects were chosen by the location of convenient seating. This is a sculpture of a river goddess. 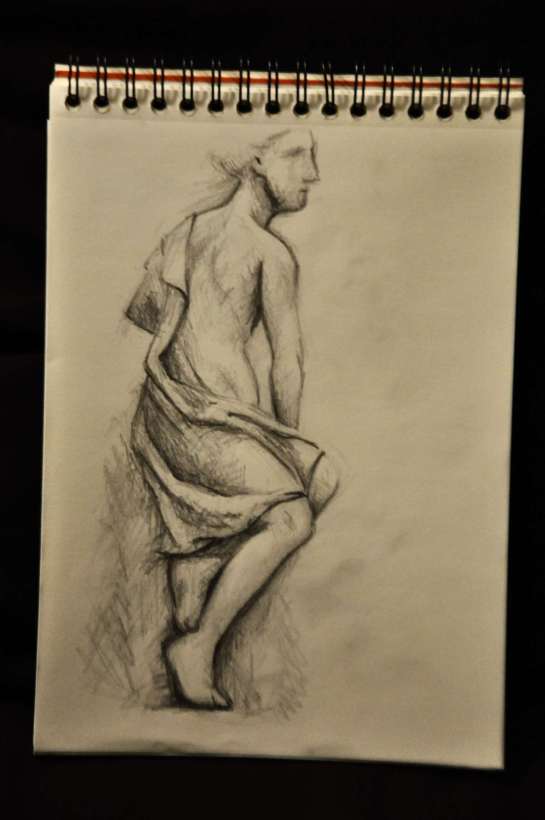 Here is another sculpture from the courtyard. It is of a pair of wrestlers. I couldn’t find a convenient place to sit, so I drew it standing up, which was a bit of a challenge. The hand of one of the figures is missing. I didn’t just get lazy. 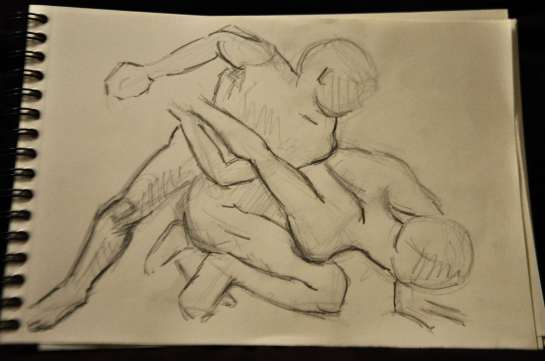 From the Cour Marly, I went into the rooms housing French sculpture from the middle ages. There was a lot of interesting stuff and I regretted not having a stool since there were few places to sit. I began sketching this stone head of an apostle that was located by a window. I had only just begun blocking it in, but I liked the geometric feel, so I left it.

Eventually, I came across this fabulous sculpture representing death. Death is not simply a skeleton, but he still has some flesh clinging to him. His abdomen is ripped open and you can see his spine. It’s so much scarier than a simple skeleton. Unsurprisingly, this was originally located in a cemetery in Paris.

Still in the French sculpture rooms, I was moving forward in time and entered some rooms with renaissance sculptures. This is a statue of what I presume is Diana with a stag.

Eventually, I moved into the Louvre’s other sculpture courtyard, the Cour Puget. The museum started closing while I was drawing and I never did get the name of this statue of a woman holding an infant reaching for a crown. Considering the period, I would take a stab and guess that it shows Louis XIV during his minority, but it could be XV or Jesus, or any king-baby.