I spent way too much time obsessing today and made this picture. 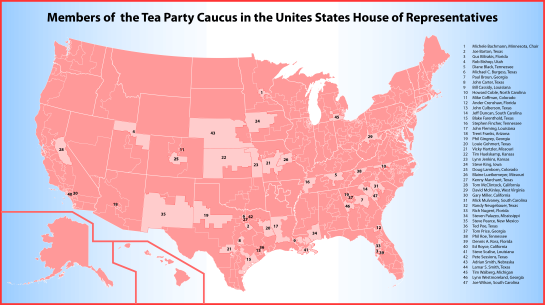 I was fascinated by how few people are represented by these far right radicals. There are 435 voting members in the House of Representatives. What they couldn’t get at the ballot box, they’ll try to get by threatening to trash the economy. Why don’t they just ask for a pony of each of them while they’re at it?

While the negotiations for the affordable health care bill was going on, I was one of those people who criticized it from the left. However, after those negotiations were past, I stopped criticizing it. People on the far left were critical of people like me for “falling in line.” I don’t see it as “falling in line”, or even compromise. It’s a matter of priorities. We live in a democracy. That’s more important to me than having every last detail I want in any given piece of legislation. It seems that the members of the ironically named Tea Party Caucus don’t consider democracy a priority.

The names are hard to read in the picture. Here’s the list: