and I’m not sure I feel like writing anything about it. Of course, I didn’t acknowledge Valentine’s Day at all, for that matter. I’m not much of a theme person. I only participate in the Weekly Photo Challenges on WordPress to widen my circle of acquaintances. However, for the past month or so, I’ve been getting my nose out of joint about what I feel are grotesque misrepresentations of the place where I live. Of course, whenever I object to some exaggerated blanket statement, the other person then casts me in the role of some ridiculous, jingoistic pro-American clown, probably conservative and most certainly ignorant of the more shameful moments of our history. I am anything but that. I don’t seek to be an apologist for anything.

I feel like the world in which I grew up is being effaced from our cultural history.

About a year and a half ago, during an illness, I started lurking around a forum for progressive politics in the U.S. Soon, I had an urge to put up some posts of my own. The site has been around for quite a few years and has thousands of users. My usual online screen names and real world nicknames were not available. After a score of attempts, and running out of ideas, in a moment of frustration, I saw the cover of a Bruce Springsteen album leaning against the wall in the corner. I typed “FourthOfJulyAsburyPark.” As I anticipated, it was available. On a site dealing specifically with politics within the United States, the vaguely patriotic reference seemed appropriate. In the context of a progressive site, Springsteen’s songs about the working man also seemed to fit. Although I’m not from Asbury Park, I was born and raised in New Jersey. Although long and awkward, it otherwise seemed to fit. Of course, it did result in some people thinking my real name is Sandy, which it is not. It also resulted in people assuming that I’m a massive Bruce Springsteen fan. Obviously, I like him; his record was lying out, but I’m not about to get his face tattooed on my ass either, if you get what I mean.

The unwieldy name caused people to shorten it to “fourth” or, sometimes, “fojap.” When I decided that I wanted to discuss subjects that were not as narrowly concerned with U.S. politics, I realized that the domain name “fojap” was available. Hence, my apparently incomprehensible name. The story is longer than it is interesting I’m afraid.

I bring this up because, perhaps, I’m feeling “stranded on this Fourth of July.” Perhaps there was some subconscious associations going on in my mind when I chose the title of that song as my screen name. When I listen to the lyrics, the paint an image of a place I know, someplace I’ve been. It just feels right. 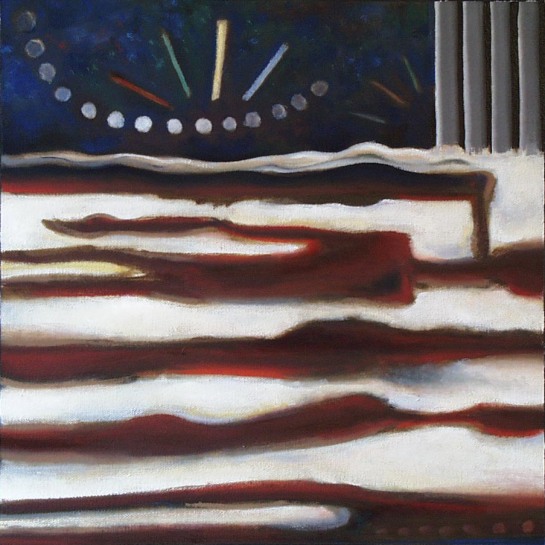