It would have been such fun this weekend to fly someplace exotic with no other purpose than to take photos for this week’s photo challenge. However, prior commitments prevented me from doing that. So instead, I asked myself, what if someone from far away came here, to Baltimore. What pictures would they take to show the culture? The monks in the photos put me in mind of church goers here. I also thought about crabs, but crabs were not in season yet. I’ve been dying to take some pictures on the marching bands, but I’m not sure where to find them when there is neither a parade nor a football game. Football was another possibility, but, again, it’s not the right time of year. Baseball, but they’re not in town this week. Finally, I settled on an American ritual that has always puzzled me. In the spring and the fall, people go outside and build fires and “roast” marshmallows. Now, it’s necessary to point out that marshmallows are nothing more than sugary confections that don’t actually require roasting and are no longer made from marsh mallows. Then, this burnt marshmallow is sandwiched between two graham crackers with a piece of chocolate thrown in. This is called a s’more. If you didn’t know, graham crackers were originally made from graham flour, which was invented by the Reverend Sylvester Graham for a vegetarian diet intended to reduce the libido, among other supposed benefits. So, in the good weather, Americans like to give themselves asthma attacks by sitting in front of an open fire eating these peculiar foodstuffs made from libido reducing crackers, chocolate and roasted whipped sugar and gelatin blobs. (If any individuals recognize themselves or their children in the following photos and would like to have the pictures taken down, just let me know.) 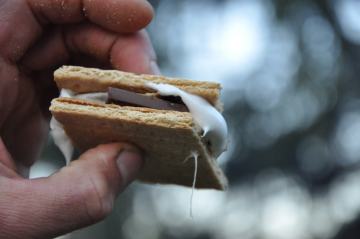 Children on a sugar high.

Purists don’t worry about the chocolate and the graham crackers.

The ritual burning of the marshmallow. 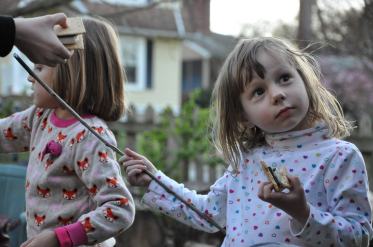 I have no idea who this kid is, but she looked cute, so I took a picture. 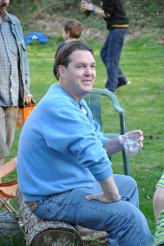