My body belongs to me.

Wow, color! Anyone who knows me has got to know that this is my challenge. Typically, I’ve been using the Weekly Photo Challenges for my own ends, as a launching off point for making new photographs. Therefore, I don’t usually put up older photos. However,  I will this time. Not only do I have a series of photos that fit the theme perfectly, but the timing is almost perfect. I missed the international protests in support of Amina Tyler that occurred yesterday, until I saw some images on a news site. Amina Tyler, for those of you who haven’t heard, is an 18-year-old Tunisian woman who belongs to the feminist group, Femen, which is known for staging disruptive, topless protests. She put a photo of herself painted with the words “My body belongs to me and is the source of no one’s honor”, written in Arabic, on the internet. Since then she has received death threats and a prominent cleric in Tunisia has called for her to be stoned to death. She has since disappeared. There have been various rumors about what has happened to her, but I have not yet been able to find a reliable source.

I first heard of the group Femen when I took some photos of them at a demonstration for marriage equality last December. As you can see, the pictures are full of color. 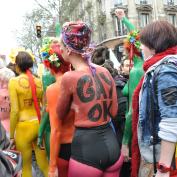 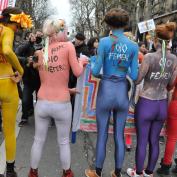 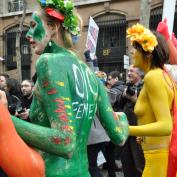