I feel funny adding the warning, “Nudity,” to the title, but I’m just trying to be nice to people who might not be expecting it. The majority of my paintings are of nudes. The one I’m posting today is very modest compared to most of my work.

This post was partly prompted by Maugryph’s self-portrait. I had two, not entirely unrelated thoughts. One was that I should do a digital self-portrait myself, but I’m not sure exactly how I would set up a mirror in a way that would be comfortable to draw. I’ll have to think about that, so don’t expect a contemporary self-portrait anytime soon. The second thought had to do with some suggestions I was going to make to Maugryph about his technique, especially regarding skin tone. Although I had taken many figure drawing classes, as well as a few figure painting classes, I took a portrait painting class a number of years ago and I found it to be extremely helpful.

The sketches I’ve put up have been things I’ve forced myself to do in large part because I haven’t been in the mood to draw. I’ve found that working actually helps me get in the mood, so I keep trying to force myself from time to time despite not feeling inspired. Suddenly, I became self-conscious and I thought to myself, “You’ve really put up some shabby work lately. Before you give anyone suggestions, you should put up some better work.”

As it happens, I started painting in oil at the age of eight, taking it very seriously. It probably came as something of a surprise when I decided to not major in art in college. I think the whole world just assumed I would. However, I continued to paint, and I’m in my late forties. So, whether you like my work or not, I have a lot of experience handling paint.

So, I wanted to dig up a portrait I did of myself about ten years ago. First I poked about the old canvases in the corner of my room until I realized that when I moved, I only put the unfinished canvases in my apartment. The finished ones are in storage somewhere. Then I started going through my old floppy disks on which I’ve stored most of the photos of my paintings. Of course, I couldn’t find a photo of the painting I have in mind. I’m probably going to spend the rest of the day transferring the contents of the floppies onto an external hard drive I had lying around.

In the meantime, I thought I’d show everyone an old painting I did. I sent these photos to a friend when he said that he had always been curious to see paintings at different stages. In this case, I worked from photographs. I much prefer live models, but I can’t afford to pay one, and I don’t really have the room for it any way. I did this before I took the portrait class. I was playing around with trying to build up a painting using semi-transparent glazes over a monochromatic underpainting. The skin tones are not intended to be realistic. 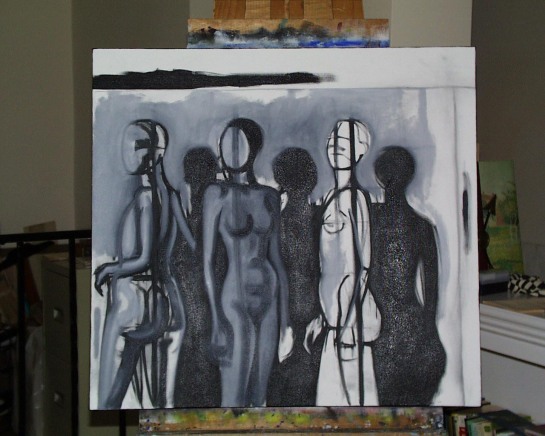 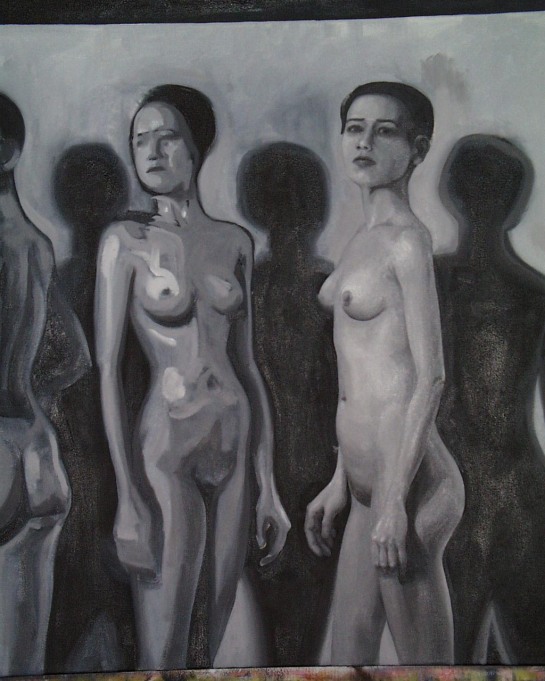 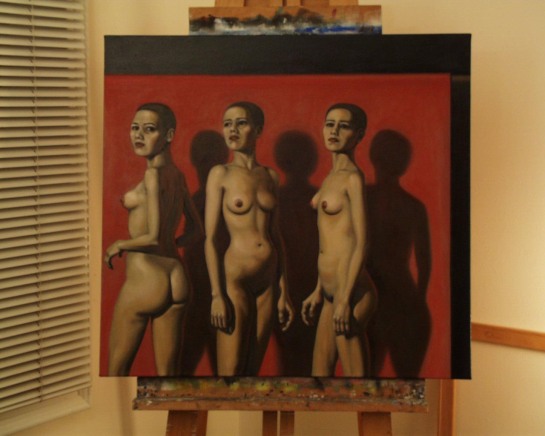