Because time only goes forward, I thought to take the opportunity of this week’s theme to show a photo of a clock I took recently. (The photo, not the clock. The clock’s still there.)

This clock is located at a place known as Lambert’s Castle in Paterson, New Jersey. The large home was built in the late nineteenth century by an English immigrant who had worked in cotton mills in England and came to the U.S. where he worked his way up to owning a silk mill. After making his fortune, he built a large house in New Jersey which he filled with many works of art. He lost his fortune and the house was sold to the city of Paterson, but by then much of the art was gone. The clock in the photo remained. Lambert’s Castle is now the home of the Passaic County Historical Society.

The clock is called the “Cornu Clock” and is located on the first floor of the mansion in an impressive double height space surmounted by skylights. The last time I saw this space, the second floor had been closed up. In the intervening decades, the building has undergone renovations and is in much better shape than when I was a child. According to an old postcard  the clock is “Made of Onyx, bronze and embellished with ormolu in the greatest of French tradition, the timepiece stands 13 feet 6 inches. It was exhibited at the Paris Exposition of 1867.” It is a conical clock, meaning that the pendulum moves in circular motion, rather than back and forth, and describes a cone in space. A bronze statue of a woman in a classical costume holds the pendulum. It sits on an impressive marble base in which are embedded a variety of clock faces showing the months, the days of the week, as well as a barometer.

I love mechanical things and truly adore elaborate clocks, especially ones that reveal the movements. With the unusual conical pendulum, lovely sculpture, elaborate mechanics and grand scale, this one is quite obviously very special and unique. Well. . . maybe not that unique. 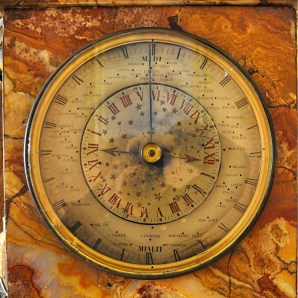 I didn’t know if E. Cornu was a clock maker, a designer, a sculptor or what, so I did a little search on the internet. Interestingly, there is what appears to be a similar clock with an identical statue and a conical pendulum at Drexel University. However, the Drexel University website says that their clock was made by Eugene Farcot. In the second to last picture, the name Eugene Cornu is clearly visible. I couldn’t find much information on Cornu on the web, but there was a bust of George Washington attributed to him as well as some sculptural decorative objects, including a clock, on the website of the Christie’s auction house. Other than that, the only other reference to a Eugène Cornu that I could find was of an early twentieth century architect and yacht builder. The sculpture on the Drexel clock is attributed to Albert Ernest Carriere-Belleuse.

The Farcot Conical Clock housed in the Great Court is believed to be one of only three in the United States: one is located at the Clock and Watch Museum in Columbia, Pa., and another at the Roosevelt New Orleans, a Waldorf Astoria hotel.

According to the Passaic Historical Society, their clock was produced as the sixteenth in a series of thirty-six, if I’m remembering correctly, and the docent said that it is believed to be the most elaborate of the series. The plate on the Cornu Clock reads:

and then beneath that some script which is hard to make out, but I believe says

So now I’m puzzled about who Cornu was and how he is associated with the clock. It is possible that he commissioned the clock? If anyone knows, please tell me in the comments.